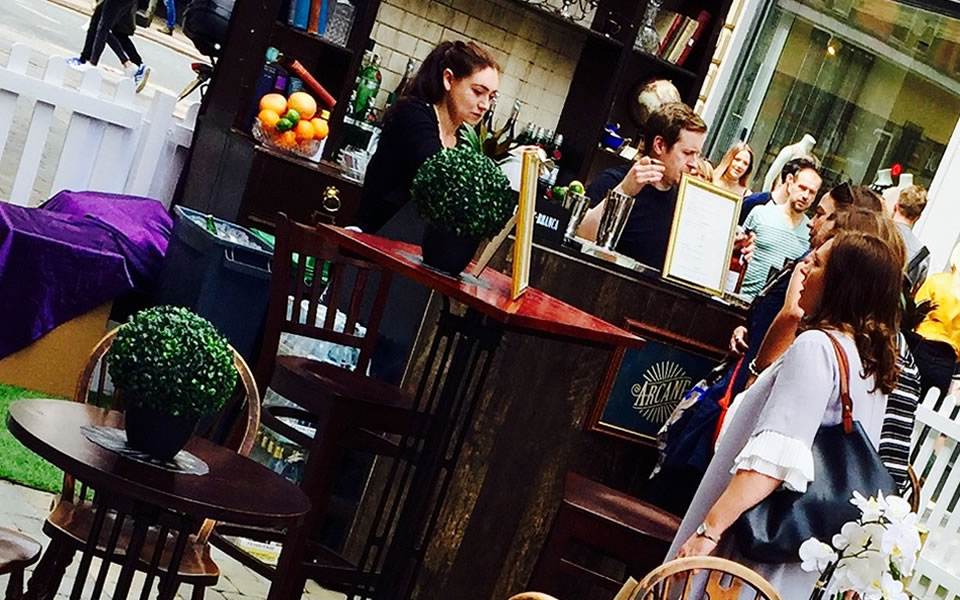 Never wholly satisfied with keeping our creative prowess within the confines of Arcane, our neighbours over at Castle Fine Art Gallery prompted a conversation about the possibility of us working together for each of the exhibitions that came through there. What we were tasked with doing was designing a bespoke cocktail based on the artist who showcasing their work. A year later, 6 artists, 6 cocktails and events in both Liverpool and Chester, our working relationship flourished and we agreed to provide a bar for the upcoming event ‘King Street Festival’

Launching last year, the ‘King Street Revival’ was an event to celebrate the once historic affluent banking district of Manchester’s resurgence to former glory. With many shops, restaurants and bars opening, it’s been an exciting couple of years for that part of town. This years event was touted as a ‘Fashionable weekend all along the historic shopping street. Featuring: Al Fresco Dining, free Fizz & tastings, a glorious bandstand, pop up parks and a stylish crazy golf’ and it certainly provided.

The emphasis on our drinks was inspired by two elements, firstly the artist Alex Echo and Mark (owner & Amari aficionado) who had done some intensive research into the complexity and diversity of Amari. This coupled with the on trend of low alcoholic cocktails we dedicated the bulk of our list to it. We were also part of the King Streets cocktail trail, which was a delectable mix of blackberries, blueberries, raspberries and gin. The perfect summer drink.

The back bar that had been built for cocktails in the city made its way into alfresco territory and looked handsome on King Street and in the confines of white picket fences and garden party vibes. The artist being showcased was Alex Echo who specializes in bold and colorful paintings and adorable color splashed porcelain bunny rabbits. We had to hold our breath on a few occasions as children who wandered within the picket fences were a little too hands on with the £8,000 bunnies!

The city was very busy over that weekend; especially on the Sunday were the commemorative concert ‘One Love’ was being held over at the Old Trafford Cricket ground. The atmosphere was truly inspiring; the strength the city has shown, as a collective in the wake of the terrible attack is a testament to the true magic of this city.  The weekend was a great success, plenty of laughter, cocktail shaking and questionable soundtracks. We look forward to being involved next year.